HOW AMERICAN AIRLINES DID A MAINTENACE GROUND RUN ON A DC-4. 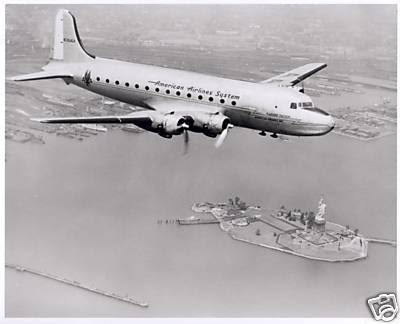 HOW AMERICAN AIRLINES DID A MAINTENACE GROUND RUN ON A DC-4.
BACK IN 1948

American Airlines performed a pre flight inspection to include an engine run up, with ground operational test of all engines. on their aircraft after the completion of each DC-4 periodic inspection type No. 1, No. 2 or No.3 inspection or whenever a flight lays over for four hours or more or after termination or cancellation at a station where the airlines mechanics are available, and prior to the origination of any scheduled flight.

1. Four men are generally needed to make the run up, two in the cockpit and two on the ground.
2. The engines will be started in the order3-4-2-1
3. In starting #3 and #4 the mechanic on the right side controls the fuel booster pump switches, and the starter mesh and primer switches with his left hand, leaving him free to observe the engine operation and actions of the ground personnel on his right. The mechanic on the left controls the throttle setting with his left hand and mixture control with his right while observing the oil pressure and R.P.M.
4. In starting #2 and #1 the mechanic on the left side controls the start mesh and the primer switches with his right hand leaving him free to observe the operation and ground personnel on his left. The mechanic on the right controls the fuel booster pumps and mixture controls with his left hand and the throttles with his right while observing the engine oil pressure and R.P.M.
5. Connect nose wheel torgue links and park brakes. (Hyd Pressure up)
6. Switches off…pull props through two turns at least six blades in direction of rotation.
7. Store ladder and tail post on aircraft.
8. Connect battery cart. Close all cargo doors and cabin doors.
9. Turn Inverter and all necessary lights on.. Navigation and cockpit all others off.
10. Turn magneto master switch “ON”
11. Station fire guard in position outboard and to the rear of the engine being started. Position safety guard were he can see the cockpit
12. Turn tank selectors “ON” cross feed “OFF”.
13. Open throttle ¼
14. Set Propellers in low pitch.
15. Put supercharger in “LOW”
16. Open Cowl flaps.
17. Turn fuel Booster pump “ON” Pressure 19 ½ lbs @ 24 volts.
18. Set booster vibrator selector to proper engine.
19. Prime for 3 or 4 seconds depending on temperature condition s and temp of engines. NOTE.. Prime only when meshing and engine is turning.
20. Receive “ALL Clear “ from safety man.
21. Energize the starter for 10 to 15 seconds max, then engage mesh switch. (induction vibrator is connected to mesh switch. Hold both start and mesh switches down until engine starts or a max of 15 seconds. Then allow a 30 second cooling period before attempting another start.
22. After engine has turned over two revolutions then turn individual engine mag switches to “BOTH “ positions
23. Move mixture control to auto rich as soon as the engine starts to fire. Return mixture control to idle cut off if engine stops firing.
24. Run engines at 800 R.P.M. until oil pressure comes up, increase to 1,000R.P.M. for engine warm up. Oil pressure 80 to 120lbs.
25. CAUTION.. If oil pressure fails to come up within 30 seconds after starting, stop engine and investigate.
26. Turn fuel Booster pump “OFF”
27. Start engines #4 #2, and #1 in the same manner.
28. Switch to ship’s batteries after all engines are running and have ground personnel remove the battery cart and fire equipment.
29. Check Hydraulic fluid level and pressure..3,000 lbs and brake operation before moving ship.
30. Check oil pressure at 1000 R.P.M. 40lbs @70 Deg. C, oil temp.
31. Check Fuel pressure at 1000R.P.M. 22 lbs plus or minus 1 lb.
32. MOVE AIRCRAFT ONLY AFTER RECEIVING “ALL CLEAR” FROM GROUND PERSONNEL. 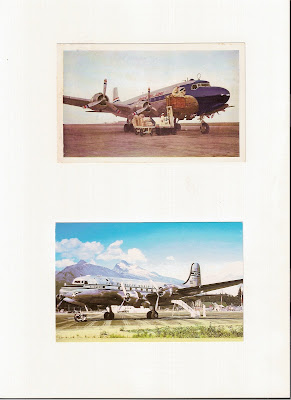 PROCEDURE FOR GROUND OPERATIONAL TEST
AND ENGINE RUN UP.

1. Operate #2 engine at 1800 R.P.M. and idle the remaining engines, then knock of the hydraulic pressure by operation the wing flaps. Note the Hydraulic system pressure build up. Repeat operation to check #3 pump. Hydraulic regulator should then be checked to see if it kicks in and out at 2700 to 3000 lbs. The main system relief valve should be checked to see that it is holding at 1800 lbs and assured by use of the nose steering wheel which should be in operative.
2. Taxi the Airplane and check the left and right brake operation. Nose wheel steering shall be checked by steering the ship from one extreme to the other while the airplane is in motion at slow speed.
3. Check cowl flaps on all engines to see that they move to closed, trail and full open positions. CAUTION Keep cowl flaps open during all engine ground operations.
4. With all engines operating at 1000 rpm momentarily turn each magneto se=witch from “Both” “Right” “Left” and “OFF” positions to check for dead magneto and to check the “Ground Circuits”
5. The fuel system should be checked so all engines will operate with possible combinations of wing, tank cross feeds and tank selector valves. Check individual wing tank selector valves to make certain it will cut off the fuel supply when placed in the “OFF” position.
6. Check sequence and operation of wing deicers. Pressure should be between 7 and 8 lbs. Record the pressure on the form,. Cycle should be completed in 40 seconds. Note warning light operation… Bleed A/P system by opening speed valves to #2 position. Open auto pilot oil valve. Operate each control to full extreme position by means of direction control knob and hold in each position for at least 30 seconds. NOTE : Repeat preceding instructions if spongy condition exists (Air in the System) Return all controls to neutral and check to make sure that each control can be overpowered in both directions. Record A/P pressure which should be 125 lbs +- 5 lbs on form. Trun all A?P speed valves and oil pressure valves to “OFF” position.
7. Record vacuum pressures from both left and right pumps.
8. Horizon and Gyro -4” HG +-1/2
9. Turn and Bank -2” HG +-. 1”
10. Bank and Climb – 4 ½ HG +- ½ “
11. With propellers in low pitch turn up the engines to operate at 25” manifold pressure and approximately 2000 rpm shift prop controls (slowly) from “Low” to “High” pitch several times to bleed air out of the prop domes. Approximately an 800 RPM drop should occur when shifting the propellers.
12. With the engines running at approximate cruise position, check the alignment of the propeller and throttle controls.
13. Note: if necessary to re-adjust check alignment with engines set at 2100 rpm and 32” manifold pressure.
14. Check Generators at 25 “ manifold pressure for balance of voltage and amperage. Should be recorded on form Voltage must be 28 volts, amperage must not vary more than 10% of the load.
15. Check the fuel flow gauges to see that they operate as the throttles are advanced. Setting should be checked at 25” and recorded on ground test form. Should be approximately 240 to 260 lbs per hour.
16. Record Cylinder head temperatures of all engines. Maximum allowable temp 200 Deg C 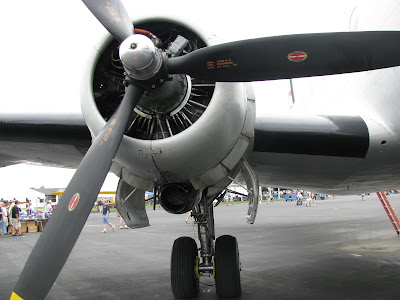 17. NOTE: Check on maximum head temperature during all times when ground testing the engines.
18. Operate engines at 25” MP apply carburetor heat . Temperature should have a rise of 40 Deg. C minimum.
19. Operate engines at 25’’ MP and shift the supercharger to “High” position. Blower shifting should occur within 5 seconds, with a rise in manifold pressure approximately 1 “ NOTE if the blower fails to shift after each attempt the control shall be returned to the low position to allow the clutch to cool.
20. Record MP as the following checks are made
21. With Fuel pumps off record engine fuel pump pressure at 30” of MP. Pressure should be 22 +-
22. Record engine oil pressure with engine operating at 30” MP . pressure should be 90 lbs =- 5 lbs at oil temp of 70 Deg. C.
23. Record engine RPM at 30 “ MP RPM of R-2000-13 engines should be 2100 =- 100 R.P.M.
24. Operate engine at 30 “ MP check individual magnetos for roughness and drop off, ( Observe engine roughness by looking at the engine) maimum dropoff aloud is 75 R.P.M. if engine is smooth.
25. Record oil temperatures of all engines after operating them at 30” MP
26. Record idling R.P.M. of all engines should be 500 R.P.M. +50 -0
27. With all engines operating at 1000 R.P.M. throttle one engine back top idling. If the lights do not come on, then momentarily move the mixture control to idle cut off. Check the pressure where the fuel and oil warning lights come on then return the mixture to its original position before the engine stops. Do the same with the remaining engines to check their individual warning circuits. Fuel pressure warning light 19 lbs +1 lb. Oil pressure warning light 45 lbs +- 5 lbs.
28. Hydraulic fluid supply should record “normal in flight “ with maximum pressure on hydraulic system and the flaps in the up position.
29. Prop feathering operation shall be checked during run up while the engines are running at 1500 R.P.M. NOTE: Leave the button in only until drop in R.P. M. is noticed then pull it out.
30. Mechanic who ground tests the airplane shall sign his name u=in full and enter the time of day to certify that the engines are airworthy.
31. Radio mechanic shall sign his name in full and enter time of day upon completion to check the radio is airworthy.
32. Foreman or Chief mechanic shall sign his name in full certifying that all forms have been completed. 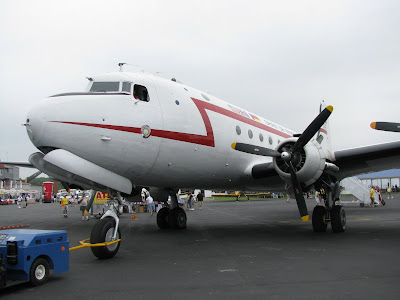 1. Run engines at 1000 R.P.M. in “FULL RICH” permitting the Cylinder head temperatures to cool below 200Deg. C
2. With engine at 1000 R.P.M. move mixture control to “IDLE CUTOFF” When it has stopped turning turn off all individual and master switches.
3. Leave cowl flaps open to permit engines to cool so ignition insulation will not be affected by residual heat in engine.
4. Place fuel tank selector valve handles, all electrical switches and master switch in the “OFF” Position. 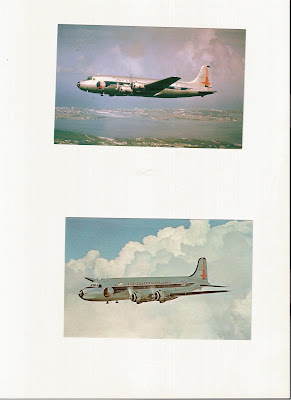