Back in the sixties when airliner watching was a real down to earth pleasure. I use to listen for the high pitch sound of the Rolls Royce engines high in the sky coming from a United Airlines Caravelle flying along J-60 going into New York. It was always a pleasure to see the caravelle letting down over my home town. Airliner watching was a great hobby.
Found this article in the 1957 edition of Flight Global.
Flying the Caravelle 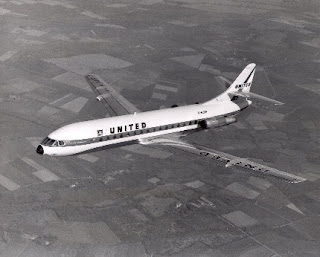 TO get the Caravelle moving in order to taxi out it is necessary to use the two Rolls-Royce Avon RA.29s at about 60 per cent power; they are first opened up to 5,000 r.p.m., and the correct taxying speed can thereafter be maintained with about 4,500 r.p.m. Directional control is by the steerable nosewheel, making use of brakes unnecessary; owing to the fact that the engines lie so close to the fuselage centre-line asymmetric power is not practicable for steering HERE is "Flight's" first report of the flying characteristics of the Sud Aviation Caravelle, France's increasingly favoured short-range jet air- liner—a class of aeroplane which is commanding the close attention of the British industry at the present time.

The author, who regularly contributes Italian news to our pages, is also a free-lance test pilot. purposes. Rudder control becomes effective at 75 to 80 kt. Full take-off power—10,500 lb thrust at 8,160 r.p.m.—can be held on the brakes. For take-off the best flap setting is 10 deg. Allowable eg. travel is between 20 per cent and 35 per cent of the mean aerodynamic chord. With the Caravelle at a gross weight of 90,400 lb the nosewheel is brought off at about 7 kt below unsticking speed, which is 120 kt. Longitudinal stability, both during and after take-off, seemed good. Forward visibility I found to be beyond criticism, but on this prototype the outlook to each side—and especially to starboard—left something to be desired; improvements are promised in the production version. From "brakes off" the full-weight take-off run lasts approxi- mately 30 sec at an ambient temperature of about 20 deg C, and the undercarriage and flaps can be brought fully up some 20 sec after leaving the runway. Optimum climbing speed— 255 kt—is attained in 55 sec. The time taken to reach safety speed of 1.3 V8 hardly calls for consideration, as the Caravelle does not normally unstick until this speed has been passed. In accordance with American C.A.R.4b requirements, for take-off at an airport altitude of 3,280ft a gross-weight reduc- tion of 5,500 lb is necessary in order to achieve a take-off dis- tance comparable with the full-weight sea-level figure. An increase of 10 deg C in airport temperature implies a weight reduction of about 2,600 lb. To put the matter another way: for operations at maximum weight these airfield conditions require, respectively, a 9 per cent increase in take-off distance in the first case and a 490ft increase in the second.

One increases optimum climbing speed progressively to 290 kt at 13,000ft, thereafter holding it at that figure up to cruising levels. Engine r.p.m. are held at 7,100 up to 30,000ft, then increased slightly (to 7,250) until the desired cruise alti- tude is attained. Initial rate of climb is about l,500ft/min (with a jet-pipe temperature of 580 deg C) and service ceiling is in the region of 42,000ft. Spiral stability is positive in both cruising and approach configurations. In approach and landing configuration the unaccelerated stalling speed at gross weight is about 90 kt, and one finds that a slight tendency to drop a wing can be easily counteracted by use of aileron. At all altitudes, and with any e.g. position, a slight reversal of stick forces occurs at approximately 100 kt. This is not caused by instability, but by airflow changes, and an automatic trimming device now counteracts it, so that the pilot is not aware of the effect. The trimmer is capable of cancelling-out stick forces at any e.g. position and airspeed. Trimming is accomplished by varying the datum position of the jack which applies artificial-feel loads to the control column. The control system [described in detail in Flight for May 27, 1955] is fully powered, with two independent hydraulic supplies; there is no means of reversion to manual control. Asymmetric power produces no yaw, because the thrust lines pass through the e.g., and no trimming is required to counteract yawing or rolling moments. By using the sensitive and effective trimmer it can be established that the Caravelle is longitudinally statically stable in all configurations and e.g. positions. A standard climb to 33,000ft covers 220 miles, takes 40 min and uses 4,400 lb of kerosine. Between 33,000 and 38,000ft, cruising speed at 7,250 r.p.m. settles at 390 kt with a fuel con- sumption of 4,400 lb/hr. At 32,000ft, cruising speed is 400 kt and fuel consumption 5,000 lb/hr. Maximum level speed at 20,000ft is 270 kt I.A.S.; and in this condition dynamic stability remains good, even with acceleration from 1.5 to 2 g. Decreased temperatures at the higher altitudes cause a slight control friction, but effectiveness is not lost and the stick continues to return to neutral even after being sharply dis- placed.

The layout of the air-conditioning and pressurization system was described in detail in Flight for May 27, 1955. In practice one finds that the indicators and controls are well positioned and the system as a whole effective. Sea-level cabin pressure can be held up to 18,000ft, which allows the maximum rate of descent of 5,800ft/min to be used without causing discomfort to the passengers. A standard demand- regulator oxygen system is fitted for the crew; and the "blinker" indicators are well placed for easy observation when necessary. Pressurization, air-conditioning, anti-icing and fuel system are controlled from panels distributed around the co-pilot's seat. The highest Mach number reached during my test was 0.84 at between 35,000 and 40,000ft. The only compressibility effect was a slight buffeting which began at a Mach number of 0.82; and there were no pitching tendencies other than those caused by the normal changes in static stability follow- ing increase in speed. Airbrakes, which may be used at maximum Mach number and I.A.S., extend in three seconds but cause a certain amount of vibration. Reduction of power is also an effective way of reducing speed. Aileron effective- ness is maintained at all speeds and Mach numbers. A typical let-down from 38,000ft to 5,000ft is made without airbrakes at a constant 216 kt in 36 min, covering 150 miles and using 660 lb of fuel. Standard reserves permit 45 min holding at 10,000ft, a missed approach and a diversion of 150 miles, using 6,600 1b of fuel. During the approach and landing one finds that flap and undercarriage extension cause negligible trim changes, and the airbrakes remain very effective. The normal approach is made with power at 1.5VSL (135 kt). Small power-variations produce only small results, but a strongish ground effect in calm conditions distinctly assists the pilot in rounding out. In power-off approaches or strong winds this effect dis- appears. From the 4,500 r.p.m. approach setting, full power can be reached in five seconds and acceleration is then suffi- cient to re-establish safety speed very rapidly. With the tail braking parachute the landing run can be limited to 1,800ft; without it, at a weight of 86,000 lb and in standard atmos- phere, the ground run is 2,160ft. At 66,000 lb the run is reduced by 650ft. [A full structural description of the Caravelle, with cutaway drawing, first appeared in Flight for May 20, 1955.