This is a little walk around of the Custer Channel Wing, sitting on the ramp at Mid Atlantic Air Museum at the Reading Pa. Airport.

The channel wing is an aircraft wing principle developed by Willard Ray Custer in the 1920s. The most important part of the wing consists of a half-tube with an engine placed in the middle, driving a propeller placed at the rear end of the channel formed by the half-tube.
A wing functions because the air over the wing has a lower pressure than the air under it. The conventional aircraft must reach a significant minimum speed before this pressure differential become large enough that it generates sufficient lift to become airborne.
In Custer's channel wing the rotating propeller will direct a stable stream of air backwards through the channel. A propeller will at the low pressure side normally be supplied by air from all directions. Since the half-tube prevents air from being drawn from below, the air will be sucked through the channel instead. This creates a strong low pressure area in the channel, which again generates a lift.

The old bird is in rough shape. 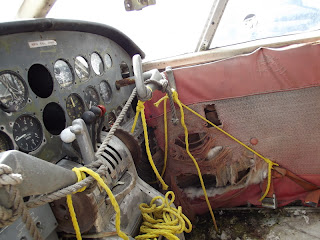 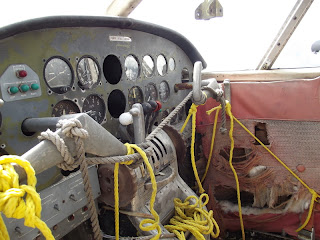