Concorde What A Beautiful Aircraft 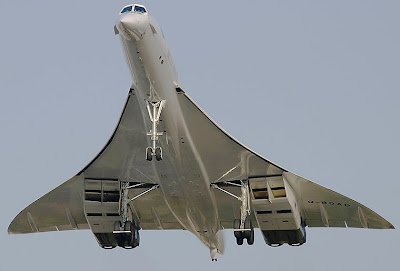 In May I am taking my grandson on a trip to the U.S.S. Intrepid in New York. Among all the aircraft displayed on her flight deck I most want him to see the Concorde, British Airways G-Boad. Hopefully I will be able to get some great photos, inside and out.

I never got to see the Concorde up close on the ground. The only time I ever seen one was while I was out for a run one summer day. I saw a Concorde orbiting in the holding pattern over the East Texas VOR (eastern Pennsylvania), on one of its extended legs it passed over my home area. It made about two orbits then disappeared to the south. I don't know if it was Kennedy bound or Washington Dulles. There were many Thunderstorms in the area that day. But it was still pretty cool to see it orbiting the area.

Below are a few articles on the Concorde from the archives of Flight Global.

I AM EXPECTING Concorde to be a very nice aircraft to fly.
What the airline pilot wants to know is whether or not it
will be a good aircraft to operate, in all weathers—at all
times and all places.
When a pilot has his first look at the Concorde flight deck,
he will be dismayed to see so much crammed into such a
small space. The 8+ft fuselage diameter tapers to the pointed
nose, and into the space which is available as a cockpit must fit
the controls and displays for one of the most sophisticated
aircraft-systems ever produced. *
The layout allows a fully integrated operation to be carried
out by three men. During take-off, landing, and all critical
phases of flight, the engineer sits forward between the pilots,
monitoring, assisting, looking out. Within his reach are
throttles, fire handles, intake controls and so forth. Behind
him, the systems panel is designed to be set up and left. At
eye level, faults and warnings are displayed on a panel clearly
visible to all crew members.
The pilots have identical instrument panels which carry
large attitude indicators, and radio/inertial horizontal situation
displays. Attitude is shown over the full range with Inertial
Navigation System (INS) accuracy. Cross-pointer flight directors,
MDA indications, expanded localiser and rising runway
focus essential information where needed during low visibility
approaches. On the Horizontal Situation Indicator (HSI) the
pilot reads distance to go, ground speed and drift. Deviation
from localiser or INS is displayed.
The mach meter presently carries moving bugs which define
the operating limits. A centre-of-gravity position indicator is
used when fuel is transferred to trim the aircraft.
The autopilot controller and VOR/ILS selectors are mounted
where they can readily be seen by the three crew members.
Push buttons were chosen for reliability and ease of use. This
fail-operative autopilot will be certificated to Cat 2 on delivery
and Cat 3A thereafter. In addition to normal autopilot
functions it will provide height acquire; vertical speed hold;
speed control; INS navigation; vertical navigation; and automatic
landing.
With the engine instruments are configuration, reverse, and
reheat indications, and nozzle area. Intake controls are at the
forward end of the engineer's system station and fuel transfer
switching is readily available.

Beneath the engine instruments are the three inertial controllers.
Space has been retained in this area for a fully
automatic chart display driven by the INS. and one controller
will probably be moved to the rear.
Departing London for Kennedy, the aircraft will be rotated
at about 180kt to achieve lift-off speed of 205kt at an angle
of 15°. Although take-off directors have been proposed for
this manoeuvre, 1 am not convinced that the director will do
anything for us, and that a satisfactory job cannot be done
without one. (We have an open mind, although we are working
to produce a runway guidance device for low visibility.)
The noise abatement procedure calls for 250kt at 500ft, and
throttle after given time to 500ft/min climb.
With the aircraft cleaned up, the climb continues at 400kt,
and if there is no ATC or boom restriction, the aircraft
becomes supersonic at 29,000ft, 80 miles from London Airport.
At 5° West the aircraft is at M1.3, travelling at over 700kt
at 38,000ft and on a standard day reaches top of climb in the
region of 10° West. From this rather indefinite point, which
varies with temperature, the cruise climb begins. (If there is
an ATC restriction, the aircraft is cruised subsonically at
M0.93.)
Reheat is used at take-off and during acceleration climb,
and seems to be a most convenient way of adding thrust when
needed. Fuel is moved to trim the aircraft during acceleration.
At the earliest possible moment the autopilot is locked on
to the INS-derived track and the aircraft is kept on the
great circle.
Studies of temperature and wind conditions during climb
and cruise on the North Atlantic have shown that the great
circle is best—when there are no ATC considerations. Higher
temperatures during acceleration do mean that more fuel is
consumed, but our own studies show that the penalties in
the worst cases are no more than 1,5001b, and well within the
route-contingency allowance.
A cruise climb at optimum Mach number will be flown.
longitudinal separation having been established by delaying
the start of acceleration of aircraft as necessary.
At top of descent, the pilot partly closes the throttles, slows
down to 325kt and descends. About 2,500ft/min should be
achievable, but we consider this to be insufficient in the
terminal areas, and have asked for the use of in-flight reverse
(the aircraft has no spoiler airbrakes).
Holding is flown at 250-300kt and the final approach at
speeds of 160kt or so. Angle of attack appears to be a
significant parameter here, and RAE are looking for a way
to display this on the Attitude Direction Indicator (ADI).
With the nose lowered, vision is very good, and auto-throttle
will simplify speed control. (I feel, however, that speed control
should present no problem to the airline pilot, with or without
auto-throttle, provided that he obeys the rules for flight in
this "different" regime.)
If Concorde meets the stringent requirements of the airworthiness
authorities and ourselves, I cannot see that a
professional airline pilot will take long to master this new
dimension. 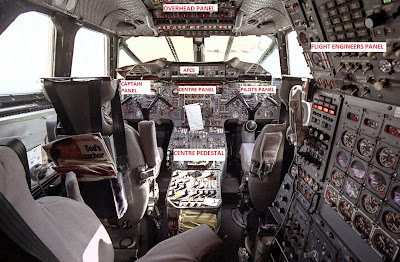 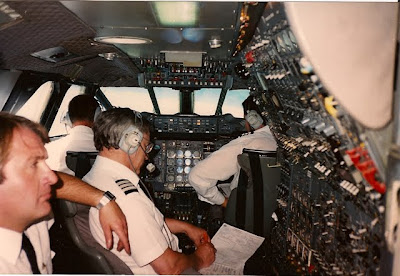 Flying Concorde
Capt E. C. "Mickey" Miles, flight manager (technical)
Concorde for British Airways, gives his impression of
flying the Concorde. Concorde is at present engaged in
a series of demonstration flights between Charles de
Gaulle airport, Paris and Rio de Janeiro. Arrangements
to fly the aircraft to Boston, Logan, to mark the opening
of the John A. Volpe International Terminal are now
being finalised.

Concerning your Concorde visit, if you have a choice, try to see the one at Seattle's Museum of Flight. It is open for a walkthru - board at the mid-cabin door, walk forward, look into the flight deck door, then exit the forward door. Included in Museum admission; the Intrepid charges $20 extra for you, $15 for your grandson. The Seattle airplane has all its engines; the one in New York does not. You can also walk thru the original VC-137, a 707-100 first used by President Eisenhower.

If you live near New York, then the Intrepid it is, but when you can c'mon out and see us some time