A Flight Global Aricle From 13 February 1953 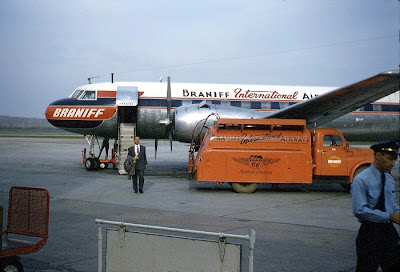 THOUGHTS ON THE CONVAIR-LINER
ONE reason for the belief that few, if any, orders have been
lost to the British civil aircraft industry by reason of long
delivery-dates may well be that a great part of the market has
already been captured by American competitors. Many of our
potential customers have quite recently placed orders for American
transport aircraft which must be fully utilized for anything between
five and ten years before their owners can think of replacing them
with turbine-powered types. In the long- and medium-range
categories most of the successful American machines are of wartime
or immediate post-war design, and the latest orders are for
those versions developed to give better performance and payload
capacity.
A good example of these successful American designs is the
Convair-Liner series for short and medium stage-lengths. The
prototype Model 240 first flew in March 1947 and was certificated
for civil aviation only eight months later. Altogether 175 Convair
240s were built—170 for the airlines. A larger, more powerful
version, the Model 340, made its initial flight in October 1951 and
received its C.A.A. certification in March 1952. Latest available
figures show that the 340 has proved as attractive to operators as
its predecessor, for over 20 orders have subsequently been placed
for a total of at least 175 aircraft. Several have already been
delivered and are in service with domestic operators.
Assuming a unit value of £200,000 per aircraft (and this is considerably
less than the figure at present quoted for the 340), these
combined orders for 350 Convair-Liners are worth £70 million—
or some £35 million more than the total value of Britain's aircraft
exports in 1952. About three-quarters of Convair's civil output is
for domestic operators, the total export value of Model 240s
delivered or 340s on order being in the region of £18 million.
Details of Convair orders and the 32 operators responsible (including
26 airlines) are as follows:
American Airlines 79 CV-240
Braniff 20 CV-340
Chicago ajd Southern 10 CV-340
Continental 5 CV-240 ..7 CV-340
Delta 10 CV-340
Hawaiian 10 CV-340
National 6CV-340
P.A.W.A. 15 CV-340
Northeast 5 CV-240 ..4 CV340
United 55 CV-340
Western 10 CV-240 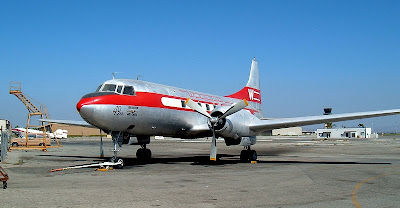 (excluding military contracts):—
previous purchase of 240s. The largest number of 340s will be
operated by United Air Lines, with 55 aircraft; five of these were
originally ordered by Pioneer Air Lines. Large numbers of the
T-29 crew-trainer version of the 340 have been delivered to, or
are on order for, the U.S.A.F., and an additional order for turboprop
variant (employing Allison T-38 turboprops and designated
T-29E) was placed in October 1951. Yet another military version
ordered in large numbers is the C-131 casualty-evacuation transport.
The Convair 240 is normally equipped to carry 40 passengers
plus baggage. By comparison, the Model 340 has a longer fuselage
providing standard accommodation for 44 passengers or additional
freight; it also has higher aspect-ratio wings of increased span to
permit the carriage of 500 gallons extra fuel (the 34o's two integral
fuel tanks give a total capacity of 1,750 U.S. gallons). Numerous
other refinements have been embodied. Basic comparative data
for the two aircraft are as follows: Convair 240: length, 74ft 8in;
span, 91ft 9m; wing area, 817 sq ft; weight empty, 30,3451b;
take-off weight, 41,7901b. Convair 340 : length, 79ft 2in; span,
105ft 8in; wing area, 920 sq ft; weight empty, 32,3991b; take-off
weight, 47,000 lb. Both types are pressurized and are powered by
the same basic engine—the Pratt and Whitney R-2800; but the
Model 340 has two CB16 engines which give a higher normal
cruising power than the CAi8s powering the earlier machine. For
short ranges the manufacturers quote maximum payloads of
10,155 lb (Model 240) and 14,100 lb (Model 340).
One disadvantage common to both aircraft is that the relatively
narrow internal cabin-width of 8ft ioin makes five-abreast seating
an impossibility. In the 340, higher-density seating can only be
achieved by installing extra pairs of seats in the fore or aft portions
of the cabin and by decreasing the seat-pitching, in stages, from
the normal 38m down to 34m. In this way, seating capacity can
be varied between 44 and 56.
According to the maker's figures, the Convair 340 can carry
13,500 lb payload over a 200-mile stage-length at a block speed of
210 m.p.h., assuming that 1,100 b.h.p. are being drawn from each
engine at a cruising height of 10,000ft in still air; under the same
conditions a payload of 10,000 lb can be carried by the 340 on a
1,000-mile stage at a block speed of 240 m.p.h.
Convair's estimate of operating costs under U.S. domestic
conditions shows a direct hourly cost of $138 and a corresponding
figure of 67 cents per statute mile. These values assume a fairly
high average utilization of eight hours daily, average journey length
of 200 miles and speed of 207 m.p.h., with seven-year depreciation
of capital investment. Corresponding figures for operating the
CV-340 outside the United States show increases of some $60 per
hour and 25 cents per mile, primary reasons for the increase being
high fuel costs and lower utilization. In any case, such figures are
probably optimistic and would vary greatly under different
operating circumstances.
The price of a Convair 340 with spares, according to the latest
available estimate, is $700,000 (£250,000), making it more expensive
than the Viscount—which, as recent events have shown, is
now capable of competing with the Convair on better than equal
terms. In performance, structure weight and dimensions, the
specifications of the two aircraft are remarkably close, but the
British machine, being four-engined, is basically more costly to
build in terms of man-hours and materials.
Only high U.S. labour costs can be responsible for the undoubtedly
steep price of the Convair, bearing in mind the fact that
the American company's design, jigging and tooling costs are
spread over an output of over 600 basically similar aircraft, compared
with (so far) 75 in the case of the British machine. Vickers-
Armstrongs claim superiority for the Viscount on the scores of
speed, operating cost and load-carrying ability over almost the
entire medium-range band. In addition, the four-turbine-engined
airliner is claimed to have more passenger-appeal from the aspects
of comfort, performance and security. Events support a belief
that the Convair sales-curve is well past its peak, and confidence
that present and future versions of the Viscount will achieve at
least comparable success on the world's short- and medium range
air routes.
Posted by Stu Richards at 4:15 PM

Thanks for keeping up such an awesome resource. very helpful!@bose
cv templates