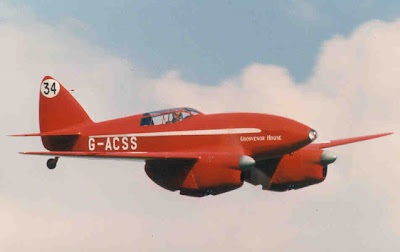 THE DH-88 COMET ONE OF MY FAVORITE OF ALL AIRCRAFT.. BELOW ARE A FEW STORIES ABOUT THE COMET AND HOW TO FLY IT. 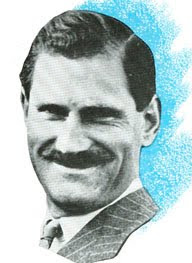 
SAYS CLOUSTON...
" It was in the Johannesburg Race, 1936, that I discovered drift can be ignored in machines that cruise at around the 200 m.p.h. mark over several thousand miles.'' " One should be able to owe accuracy in
navigating to one's own confidence in coursekeeping. . . . I would trust a properly
swung and adjusted compass for a month," " It is my opinion that one should on no account try to put the Comet down in a pretty three-point landing. It is the only aeroplane I know that must not be landed
that way. ' " We had one or two tastes of ice formation . . . In just over three minutes one thick,
heavy bunch of cumulus clouds . . . ruined the aerodynamical qualities of the Comet, loading us with two or three inches of ice on wings and tail. " 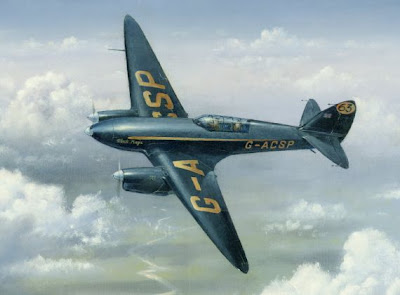 IF, as they say, long-distance record-breaking is dead, the
D.H. Comet's latest effort seems to prove that it won't
lie down. Messrs. Clouston and Ricketls, indeed, have
made it sit bolt upright.
In the process of travelling from England to New Zealand
and back, 26,500 miles, in three hours less than eleven days
(a steamer would take 80), they have established ten " records."
official and/or unofficial. Their flight :
Is the first direct round air trip to N.Z. and back.
Beats Miss Batten's (Gull) England-N.Z. time of n
days, 1 hr. 25 min. (October, 1937).
Beats Miss Batten's 5 days, 13 hr. 15 min. homeward
time from Port Darwin to England (October, 1937).
Breaks the record set up in the Comet in 1934 by
C. W. A. Scott and the late T. Campbell Black for the
return trip from Australia, though net their outward figure
(2 days, 4 hr. ^^ min., London-Melbourne), in the Mac-
Robertson Race.
Cuts three days off the Australia-and-back time of 13!
days by Cathcart Jones and Ken Waller (Comet) in 1934.
Break:. The records England-Sydney, Port Darwin-
Sydney, and Sydney-New Zealand
It is, of course, hardly fair to make comparisons with Miss
Batten's records, achieved solo in a single-engined machine.
Actually, four of the new figures will, it is hoped, be recognizable
by the F.A.I, as coming in the capital-to-capital category:
London-Sydney, 80 hr. 56 min.
London-Blenheim (N.Z.), 104 hr. 20 min.
Blenheim-London, 140 hr. 27 min.
Sydney-London, n o hr. 22 min.
It is thought likely that the F.A.I, will be prepared to recognize
any aerodrome in New Zealand as a capital for such purposes.
Blenheim—where F/O. Closton's family resides—is
at the northern end of the South Island.
Out and Home
The story of the outward journey was told last week. After
an abortive attempt a few weeks earlier, which ended in
Turkey with a damaged undercarriage, F/O. A. E. Clouston,
with Mr. Victor Ricketts as co-pilot, took the four-year-old
Comet off from Gravesend at 8.17 p.m. on Tuesday, March 15.
He put it down at Blenheim 4.57 a.m. on Sunday, March 20.
At 10.2 a.m. G.M.T. the next day the machine was in the
air again on its return trip. Sydney was reached at 4 p.m.
(another Tasman record). At 3^39 a.m. on the Tuesday they
left for Darwin reaching there at 2.-59 pm. They took off
for Surabaya (Java) at 1.32 p.m. and left Singapore at 5.47
p.m. next day, Wednesday. Karachi was reached, via Calcutta
and Allahabad, at 1.42 a.m. on Friday. They left at
2.58 a.m. for Basra, which was attained that ‘afternoon, while
the opening ceremony at the new airport was in progress
They were off again at 10 p.m. on their final and hardest
stretch—3,200 miles in 19 hours, with only very brief refueling
stops at Cairo and Marseilles, and no food or sleep. Croydon
was thankfully reached at 5.40 p.m. 011 Saturday. Set down thus in bare figures, that it may be kept on record, the story of the
flight sounds, perhaps, prosaic. But against this background may be pictured
the actual sensations of» the two men who made it; the ten-hour 2,000-mIle
stretches, sometimes protracted to 12 hours by head winds ; the incessant roar,
scream and bumping in the cramped tandem cockpit; the desire for sleep ; the
anxieties of taking-off from small aeiodromes in "thin" tropical air v.ith
nearly a ton of petrol; fog, cloud and thunderstorms, all of which were encountered.
These things considered, one may marvel at the enthusiasm of people
who will do them—and it so happens that quite " un commercial " enthusiasm has
played a large share in the present flight. 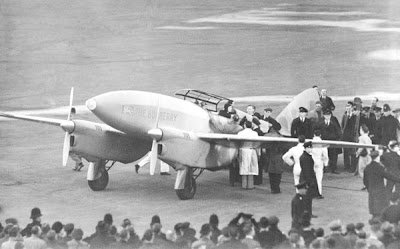 FOLLOWING so magnificent a flight as that achieved by F/O A. E. Clouston and Mrs. Kirby-Green in the De Havilland Comet it is difficult to know which
To praise first, the skill and endurance of the pilots Or the faultless behavior of t h e aero plane and engines. Though recognizing that the figures should not be
"officially" compared, it is interesting to observe that the out-and-home journey to the Cape, taking 5 days 17 hours 28 minutes from Croydon to Croydon, did not merely clip a matter of hours off the existing record set up by Mr. H. L.
Brook, but no less than 3 days 16 hours 2 minutes. On the outward trip, as reported fully in Flight last week, the Comet, now called The Burberry, set up a new record of 45 hours 2 minutes, this being 1 day 9 hours 24 minutes better than
Miss Amy Johnson's time. Then, on the return journey, a
record time of 57 hours 23 minutes was achieved, 1 day 14 hours 57 minutes better than Mr. H. L. Brook's figure. Large sections of the flight were made by night, and praise is due for the very great navigating skill displayed. Landings
were made using only the large Harley light in the Comet's nose, aided in some cases by the moon. On the return journey the pilots were showing signs of
fatigue, although they experienced better weather. Some of the high-altitude aerodromes in Central and South Africa had made take-off with big loads of fuel more difficult, and at Cairo the Comet was put down only on the third attempt,
owing, it is understood, to dazzle from the instrument panel lights.

The arrival at Croydon at 3.23 on the afternoon of Saturday, November 20, was triumphal if not so rowdy as on previous occasions. A large force of police and a long wait in the cold had thinned the crowd to a safe number of friends and
enthusiasts.

A short history of the Comet's previous successes appeared in Flight last week. Since the Istres-Paris-Damascus race in August the very full wireless equipment (including generator and converter) has been removed, giving a weight saving of
190 lb.

In its original form the Comet had two Gipsy Six R engines, but for these were recently substituted two Standard Gipsy Six Series II engines with 1,000-size D.H. v.p. airscrews. The use of v.p. airscrews is almost essential on a machine combining
speed and range. The all-up weight in this case is increased by about 1,000 lb., which means an added 1,300 miles in range, while the cruising speed is improved by 12per cent,roughly the difference between 190 and 210 m.p.h.

Interesting comments by Arthur Clouston there. Answers a few questions I was pondering on.

May I ask where this information came from, is it from one of his books or a report he wrote somewhere??

Ryan, the article and info came from an old issue of Flight Global magazine. Check out their web site, some great articles in the archives.
Stu