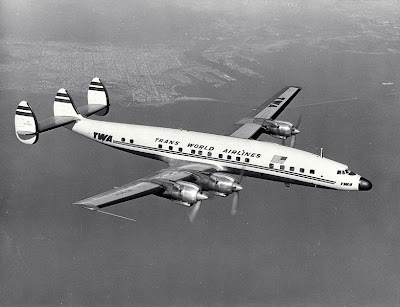 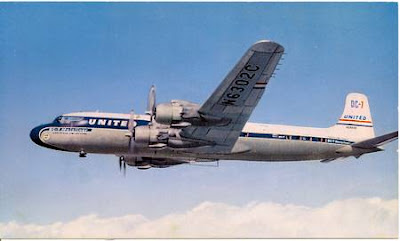 Below is an interesting article written for Flight Magazine in the June 3, 1955 issue.

WE suggested in our issue of November 5th last that the
next generation of long-range airliners would be dominated
by the Bristol Britannia and the various developments
of the Douglas DC-7. The great British turboprop
liner is developing very satisfactorily, and it is not proposed
to refer to it again here; but a new entrant has joined the race
for global traffic, in the form of a Super-Super Constellation,
the Lockheed L-1649. We now propose to draw a comparison
between this remarkable design and its similarly powered
competitor, the DC-7C or Seven Seas.

Incidentally, both types have been ordered in quantity, and so
each can be considered as a definite type to be reckoned with.
Again, both represent the policy of "stretching" of a basic design
carried to what must be the ultimate degree.

Both are powered by four Wright R-3350EA-2 Turbo-Compounds,
giving 3,400 h.p. each up to 4,000ft and having a normal rated output of 2,800 b.h.p.
to 4,300ft. Both L-1649 and DC-7C also have re-worked airframes,
with a revised tail assembly of rather greater area, and
—more important—a new wing of longer span. These new wings
have higher aspect ratio, so induced drag figures are improved,
and specific range likewise. The greater wing area is needed to
counteract the increased take-off weight; and the latter results
largely from the immense tankages which the two new transports
can put into the extra space available inside the wing. Finally,
most of the added span of both types has been inserted in the
centre section, so that the inboard engines are further out and
the interior noise level is better than before. 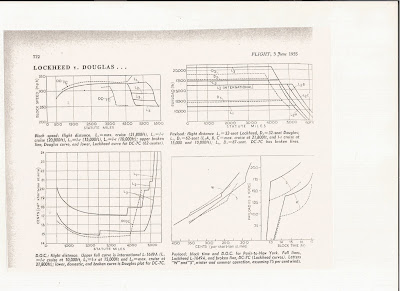 TAG PHOTO TO ENLARGE
The new Lockheed, in particular, has a wholly new wing. The
section is slimmer, the t/c ratio having been reduced from 18 to
15 per cent. The opportunity has also been taken to effect structural
improvements, and integrally stiffened skin is now used
from root to tip on both lower and upper surfaces (previously
only the underside was so made). The chordwise spread of this
integrally stiffened wing box is greater man before, so making
space available for no less than 9,600 U.S. gallons. The tankage
is entirely integral, all fuel lines being inside the tanks themselves.
Other features of the 1649 are a new hydraulic system working
at 3,000 lb/sq in, divided into two independent systems in parallel;
a new and simplified twin-booster flying-control system; a wholly
new flap system, with steel torque tubes driven by dual hydraulic
motors and screwing the flaps out on steel tracks; complete
re-arrangement of the interior (which is again "styled by Henry
Dreyfuss") and heating of the lower freight holds to above 32 deg F
at an outside air temperature of —20 deg F. 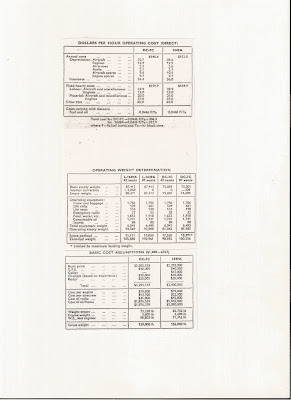 Lockheed has now worked out the performance of the 1649A
as accurately as they can at this stage, and they have compared
it with the estimated figures for the DC-7C. Some of the results
are given here, and we wish to stress that the figures are those
assumed by Lockheed. The DC-7C performance does not, however,
differ materially from that put out by Douglas, and so can
be accepted as accurate. In any case, no aircraft manufacturer
would deliberately falsify figures for a competitor's product; the
airlines who are in the market for aircraft of this nature do their
own calculations.

The outstanding characteristics of both the new transports are
the following: extreme range, either with maximum or reduced
payload; block speeds only slightly better than those achieved
widi current equipment; a range of cruising altitudes "in the
weather"; competitive direct operating costs; and a relatively low
maximum payload, either reckoned on space- or weight-limitation.
These are, in fact, all the hall-marks of a highly stretched design.
If Lockheed and Douglas had started from scratch, using turboprop
power, there is no doubt that they could have overcome their
present deficiency in cruising speed, cruising altitude and maximum
payload.

Reference to the curves of payload/range and range/block speed
indicate (say Lockheed) the following results. In standard (62-
passenger) form, the DC-7C will carry a payload of 17,050 lb
a distance (still-air, not an airline stage) of 4,010 statute miles.
The 1649A will carry the same load a distance of 4,620 miles.
The standard-configuration space payload of the DC-7C (17,550
Ib) can be carried 3,580 miles at maximum cruising power. To
increase the distance, it is necessary to adopt 1-r cruise procedure
and lose altitude. Thus, if the cruise height is reduced
to 10,000ft the range can be raised to 3,950 miles, but at
the expense of lowering the block speed from 314 to
258 m.p.h. Yet, the 1649A is claimed to offer full space
payload (17,100 lb) up to 4,130 miles at maximum cruise
power, resulting in a block speed of 315 m.p.h.
In tourist configuration (87 passengers) the Seven
Seas should take 18,950 lb for 3,750 miles; to accomplish
this, say Lockheed, it needs l-r cruise power at
10,000ft, achieving a block speed no greater than 253
m.p.h. The big Lockheed, however, is promised to lift
the same load 4,300 miles at maximum cruise power,
making possible a 316 m.p.h. block speed.
These advantages become more marked when applied
to specific routes. Taking the North Atlantic as the
obvious case, Lockheed have prepared a regularity table
for both transports, operating a year-round non-stop service
between Paris and New York. The superiority of the L-1649A is
marked; and T.W.A. are to use it on this route. The curves, based
on tourist configuration for the same route, are claimed to show that,
with the same payload, the 1649A is 2 hr 54 min faster than the
Seven Seas against summer winds, and is eight per cent cheaper on
D.O.C., and is likewise 2 hr 21 min faster against winter winds
and is then five per cent cheaper. On a load basis, the Lockheed
is claimed to take 3,950 lb more payload when cruising at DC-7C
speed in summer, and can then be operated 21 per cent cheaper;
or, against winter winds, the advantage is 4,200 lb, and 27 per cent
on D.O.C.
The operating-weight determination is shown in the tables of
weight breakdowns. The space payloads were reckoned on the
basis of 154 lb per passenger, with a baggage allowance of
(standard) 59 lb stowed and 6.6 1b in the cabin and (tourist) 48 lb
stowed and 6.6 lb in the cabin. Baggage was taken to weigh
14 lb/cu ft and freight to be 10 lb/cu ft. Operating assumptions
include the following for both transports: maneuver time, sum
of approach and landing (10 min), take-off (1 min), taxi (10 min)
and run-up (5 min), totaling 26 min, or 83.2 Imp. gal; reserve
fuel was assessed at 200 nautical miles distance to an alternate,
2 hr holding using l-r cruise at 10,000ft, cabin heating using
300 lb fuel and route reserve five per cent of block fuel. We
would also stress the obvious fact that Lockheed’s have used the
A.T.A. method throughout for calculating D.O.C.s, and not the
more realistic
Posted by Stu Richards at 3:45 PM